Let’s be honest folks, where else can you make over $7000. in 3 hours on a Friday. We went in cautiously less than an hour after the New York opening session. All signals indicated a sell short (down) trade. We even waited for some light or space between the two custom EMA’s going through the candles. No rushing no nervousness and we exited the trade 3 hours later on the opening of the first candle after the reverse arrow and audio/text box signal. Even if you were just starting out and couldn’t afford a standard contract, one could have opened a 1/2 contract and made enough to take a good profit and then have enough to trade standard contracts afterwards. Is that awesome cool or what? You can continue reading or just scroll on down to the big orange button, click on it and get this complete trading system dirt cheap, it’s a real steal. See’ya on the other side!

I originally designed this system as a 100+ pips ($100.+) scalper and it will do that but it turned out to be much more as you can see above and will see below. Actually quite awesome! I would pit it against any much higher priced system on the net.

I’m excited to introduce you to my new forex gold scalping system. My reason for creating this specialized new trading system is that because of the Chinese, Japan and other weaker economies, gold has the perfect volatility for easy 100 pip scalping. It also looks like it could continue for quite awhile. Investors, especially those from the Oriental countries have always favored gold as a solid investment and now, because of the situation I explained above, even more so. This is the why, now let me show you as a trader how you can greatly benefit from all this while having fun for 2 or 3 hours per day. Also, if you don’t mind monitoring your trade for an hour or two, you can close many of them for much more than 100 pips, in fact 800 to 1200 pips (ie: $800. to $1200 on a standard contract) are a reality in many cases as you will see on some of the charts below.

Another benefit is that there are great trades just about anytime of the day or night but as with most systems, some of the best trades are the first few hours of the London, New York and Tokyo openings. This phenomenon makes it an awesome scalping system no matter which part of the world you live in. OK. let’s get down to business. The first chart is during a recent New York market open. I am going to also explain exactly how a valid trade with great potential and over a 90% chance of being a winner looks like. There is absolutely no need to take any risky trades.

Ok, what we have here are 4 easy win scalping trades on the the first 3 and 1/2 hours of the New York forex gold session. Notice, for practical purposes I show entering each at the very opening of the candle but realistically you could have been slow entering up to as much as 100 pips and still won the trade. How’s that for flexibility? OK, I want you to understand a valid winning trade completely before you even decide to purchase this system.

1. First off, the alert arrow before your entry, even if it is 7 or 8 candles behind or more, must be in the direction of the trade.

2. The lines through the candles must have crossed over with the aqua on top of the magenta for a buy or below the magenta for a sell. Not only that, but the aqua must be sloping in the direction of the trade and as depicted on the chart, at least a 1/4″ separation between the lines.

That’s about it, if all line up, you will very seldom lose a trade. Also, don’t be intimidated as I assure you all this can be done in a few seconds after a little practice.

Now, on a full contract, each 100 pip scalp will be $100. profit. On a 1/2 contract, it will be $50. each scalp. There is usually quite a broker spread with gold trades so I suggest as always that you start with a free demo account to get the feel of the system. Then you could fund your account with a few hundred dollars and start trading less than a full contract until you have at least $1000. in your account with your profits. Then you should be ready to hit it hard. Of course, depending on your experience and risk tolerance, you might move faster or slower. Don’t worry, the markets will always be there for you, they are not going anywhere. Alright, lets look at some other charts. Next 3 will be London, New York and Tokyo all in the same day.

Four nice little trades in less than 3 hours. Notice the space between the 2 lines going through the candles. Very, very important to avoid losers. Wait for the space or lose the race. I wonder who said that, I think it was me (heh,heh)

Again we have 3 nice trades in 2 and 1/2 hours, all very easy winners. Note the second and third trades. First off, I am including 3 neat little scripts which you can use to open and close your trades instantly and automatically at 100 pips profit. But if you are the kind of trader with patience and like to monitor your scalping trades quite closely and were watching your second and third trade, you could have let them ride for about an hour or a little more in the case of the third trade, Your exit would have been determined by the bottom window, by the change of bar and dot color against you and guess what? In this case you could change your take/profit on the script to 1000 pips instead of 100 pips. Guess what? On a standard contract these 2 trades were worth 500 pips each (that is $500. each for a total of $1000. That’s a grand scalping for 2 hours, my friend. If that don’t get your adrenaline going, you might want to pinch yourself to see if you’re still alive (heh,heh). All kidding aside, that is forex scalping at it’s finest. And all for my measly, peasly, regular tiny price tag. Wow, I’m getting excited! here’s the 3rd one of the same day.

Three more trades in less than 3 hours. Not too bad for the Tokyo session which usually isn’t quite as fast moving as the other two main trading sessions. Not too shabby, even if I say so myself. 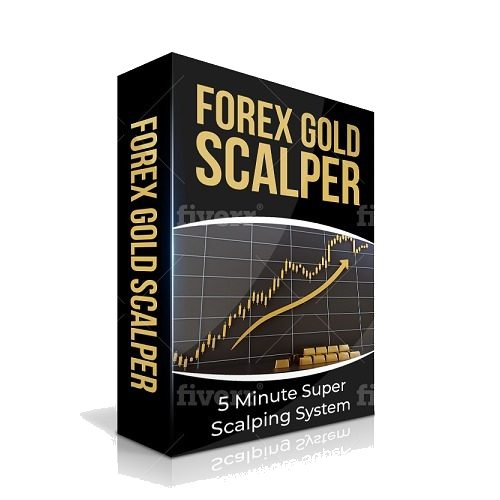 Here are another London and New York open the same day. There are so many great trades generated with this system!

Only two trades but look at this one, again if you had monitored the 2nd trade for just over an hour. Boom, 500 PIPS – $500. on a standard contract. This system is a winner that’s a must have in your trading arsenal! You just can’t afford not to have it.

Well, four more terrific trades. Another time if you were monitoring, you probably would have stayed in the 2nd trade for about 20 minutes and got out on the candle after the new alert arrow for about 400 more pips ($400. bucks on a standard). I could go on and on but you probably want to get this baby and start trading it. So below is a video of me making a live trade and then “The Big Add To Cart Button” Do your self a favor and get this sucker. You’ll be glad you did. Darn it I can’t resist showing you today’s London &  New York opening charts. 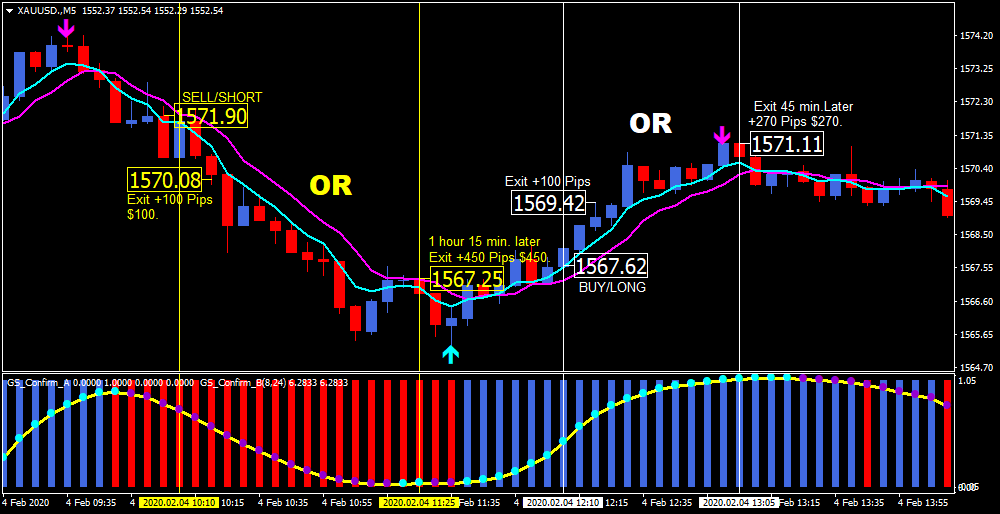 Here again we have 2 great trades worth $100. or 100 pips each in an hour and 15 minutes. But if you didn’t have something else to do and could stick it out for about 3 hours, you could have made over 700 pips on a standard contract, a whopping $720. What can I say? except that this system rocks! One thing I forgot to mention was that the gold markets are open 24/5 except for 1 hour each day. That hour is 2pm to 3pm PST, 5pm to 6pm EST or 10pm to 11pm GMT. Just keep that in mind when your trading. Here’s the N.Y. for the same day. 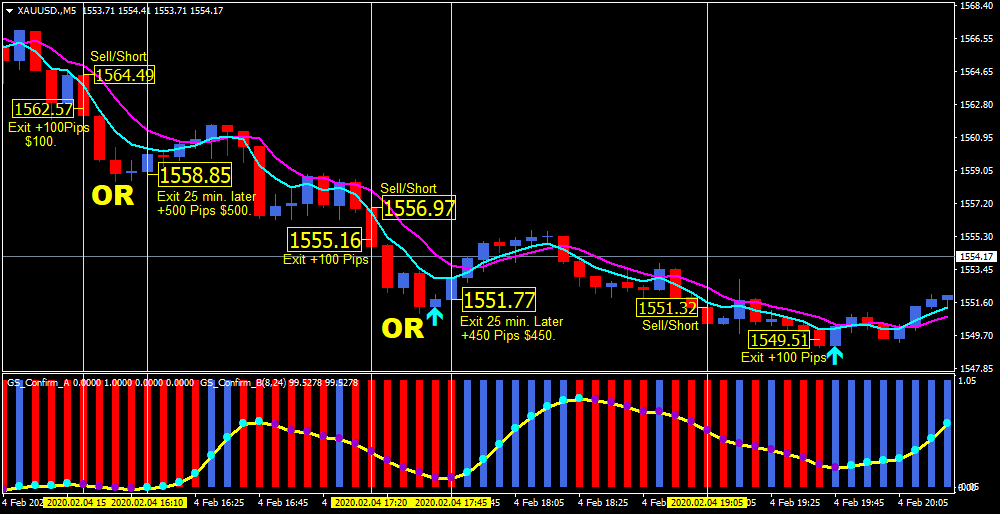 Fellow traders, I just had to show you these last 2 charts. Believe me this gold trading system is HOT! Take a look at the first trade about an hour after N.Y. open. BTW, due to lack of space, you can’t see the signal arrow but it is down and was about 6 or 7 candles prior, so we are not trading against the alert, which we never do.

OK, we jumped in and it hit our first profit target of 100 pips in less than 5 minutes. If we were monitoring the trade manually and stayed in, 20 minutes later “Out because the change of dot color in the confirmatin window for 500 PIPS PROFIT.

Second trade, about the same scenario for 100 OR 450 PIPS PROFIT. People, that’s close to $1000. profit in 1 and 1/2 hours. That’s not exactly chicken feed! Many people work 1 week or more for that! Well, I just had to show you this because I cannot stress how Super Cool this system is. “Your decision friends” I’m telling you to go for it and you will never regret it. Now here is a live trade video that I tried to make for you on the London market the next day. I made some money but screwed up and left over $800. on the table. LOL

Alright everyone, as I usually say “the ball is in your court” Don’t hesitate. go for it and start winning in 2020! Here are the last couple of trade generation charts, (that’s a promise).

Take a look at that! Five beautiful short scalps for 100 pips each or $100. each on a standard contract. Very clear entry points, all done in 3 hours of fun. Can’t beat that with a stick! Super Cool!

Another time, first 3 hours on the New York, on a Friday,already! 200 pips for the lazy trader but 850 pips ($850) for the working trader that can spend a few hours monitoring his or her trades. Clear easy ins and outs – no riskies. So click on that big orange button just below the old gold scalper and you can purchase and download this fantastic system and be in business in 15 minutes. Cheers and Hasta La Vista. Trader Ed

There are no reviews yet.